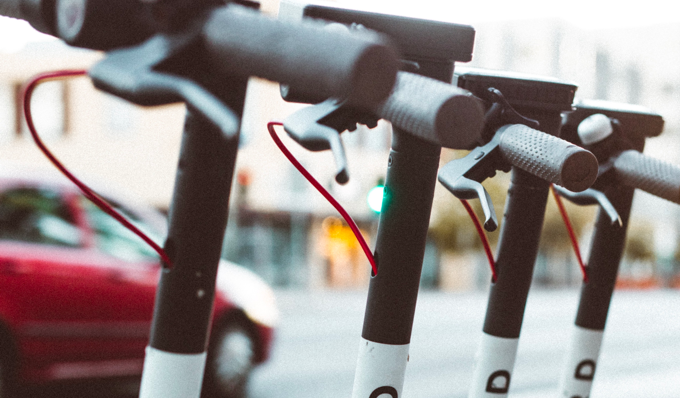 When the citizens of Santa Monica, California woke up one morning in September 2017, they found themselves smack in the middle of a technology disruption event. It wasn’t one of the gradual, everyone-saw-it-coming events like those that took down Blockbuster and Kodak. This was literally an overnight disruption.

Without warning, hundreds of Bird scooters appeared on Santa Monica’s sidewalks available for hire, capable of zipping people around town at a brisk 15MPH. It was fun, it was cool, it was easy. And it turned out that a lot of riders found the scooters to be more than a fun toy. The kids never told the adults that motorized scooters can be an extremely useful form of last mile local transit. It was a true “why didn’t someone think of this before” moment.

As new technology pushes boundaries and keeps surprising us, old traditional ways of getting things done get completely thrown out the window. Blink and everything’s different.

Disruptors Don’t Ask for Permission, They Beg for Forgiveness

Bird’s beg for forgiveness approach roll out did not make Santa Monica city leaders happy. But despite the political backlash, fines, finger pointing and some new rules, Bird scooters, along with several competitors, are now very much part of the transportation and cultural fabric of Santa Monica and beyond. Today, e-scooters can be found in hundreds of cities and universities around the US and Europe, with many more on the way.

People and governments can complain and condemn the aggressive, outlaw tactics of the new breed tech service companies like Bird, or Uber, or Airbnb, or even Amazon, but if they provide a service that the masses like, it’s hard to regulate them into oblivion.

If something as politically incorrect as a millennial tech worker scooting down Market Street at 15mph, weaving past senior citizens who are trying to catch their Muni bus can get permits to operate in San Francisco, anything is possible.

The e-scooter phenomenon is an example of ridiculously fast disruption. One could argue that scooters didn’t really disrupt an existing business but rather created a new market altogether — last half mile transportation.

Before all of these new forms of transport came into existence, citizens had few choices beyond private cars. They could use public transportation, or they could hail a taxi. Public transit is a generally a mess in the United States. And, if you go back to the pre-Uber days, taxi companies weren’t much better than taking the bus.

Taxi companies were for-profit business but their service sucked because they were essentially a regulated monopoly. If you had a medallion, you were in the club. There was little competition, demand was high, and the odds of a satisfying experience were only good if you happened to call a cab at 11am on a sunny Tuesday morning.

Had I penned this blog in 2005 and discussed how the taxi business was ripe for a technology fueled disruption that threatened the very existence of the industry, what do you think the CEO of Yellow Cab would have said? Never in their wildest dreams (or nightmares) did they think a tech company could use mobile phones to mobilize an army of independent contractor drivers and simultaneously deliver a superior experience at a lower cost. The taxi industry may not ever recover.

Big, bureaucratic organizations do not move fast. Government, education, and healthcare never really needed to compete like other industries. Now things are beginning to change. Even the most protected organizations are now at risk of losing to faster, better, cheaper alternatives that are heavily fortified with modern, mobile technology.

Healthcare is on the Cusp of Major Disruption

The writing on the wall is clear. With tens of millions of Baby Boomers moving into Medicare, the healthcare industry must evolve in order to survive. Changes to reimbursement, increasing patient spend choice, and financial incentives based on satisfaction and outcomes are forcing change, and nobody is immune.

Even the hospital “monopolies” are at risk. While the big regional medical center may be the only option in town, there are a number of new alternatives popping up. 24-hour urgent care centers in local strip malls, Walmart, CVS, Apple, Amazon — they’re all coming.

As Clayton Christensen famously pointed out in his revolutionary book, The Innovator’s Dilemma, it’s very difficult for established companies to fend off smaller, more agile competitors as they nibble away at the edges of a market until they ultimately take over the whole thing.

Tomorrow vs. Next Year

Leaders across healthcare are not blind to what’s happening. The challenge is that they are ill equipped to move quickly enough to keep the disruptors at bay. Disruptors think about what can be done tomorrow. Large establishment companies assemble a steering committee to assess what might be tested in the next fiscal year.

The good news is that a lot of new technology does not require an IT department to get started. Advancements in cloud computing along with the fact that every patient is walking around with a smart phone in their pocket makes things a lot easier and cheaper than ever before.

Technology is also getting simpler. One reason hospital app adoption is low is due to complexity. Patients do not want to download apps, remember passwords and dig around for information. They expect technology to come to them with information that is simple and short, while also being explanatory, personalized and interactive. This is one reason why text based chatbots are so attractive for healthcare. Everyone understands and prefers text-based messaging and a personal virtual assistant can bridge many gaps.

Healthcare needs to start moving faster, which requires different thinking, risk taking, rapid decision making. There are tremendous opportunities to address serious shortcomings on the customer experience side. Patients are consumers, what would Amazon do?

Many will say it is unrealistic to expect radical healthcare transformation at the speed of bleeding edge tech. But as companies created around cutting edge innovation move in for their slice of the $3 trillion healthcare industry pie, they will see no reason to operate in any other way. 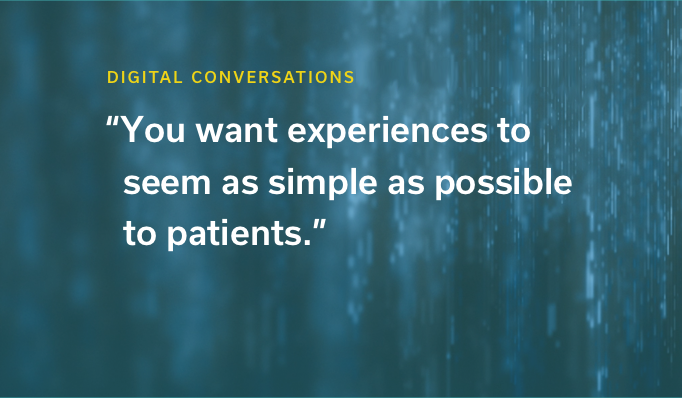 Conversational IT in Healthcare: A Foundation of Flexibility, Integration, and Massive Scale 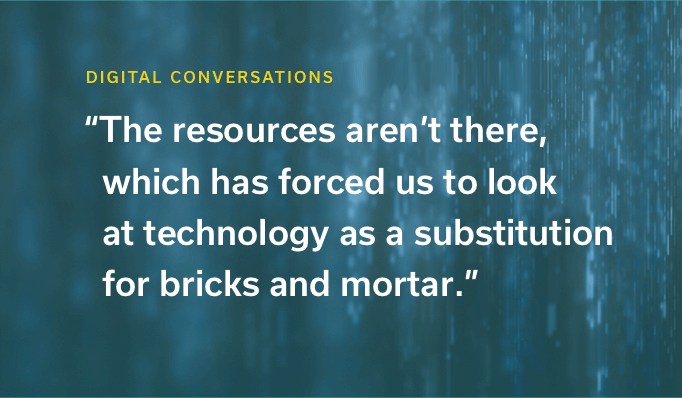 Perspectives from an Urban ED: A Conversation with Scott Campbell MD, MPH 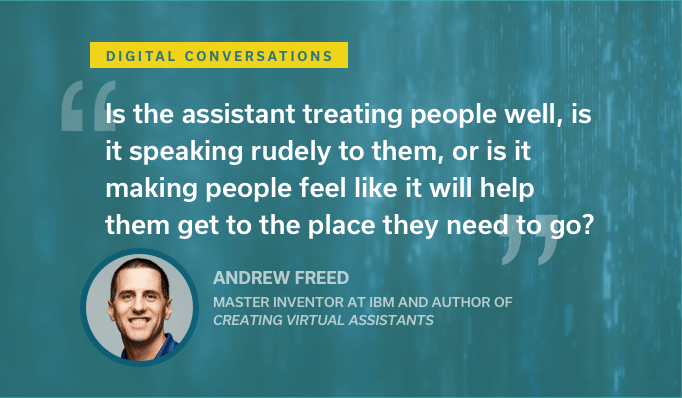 A Conversation with Andrew Freed, Master Inventor at IBM and Author of “Creating Virtual Assistants”